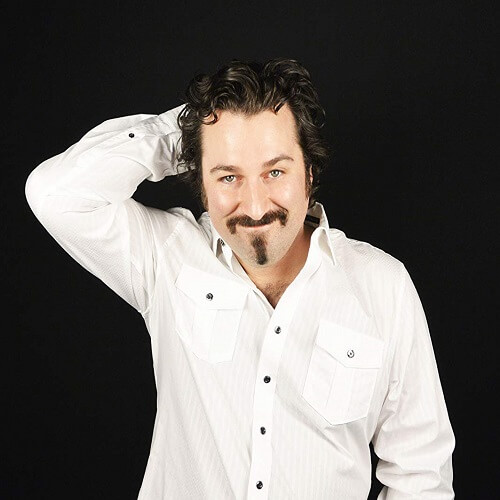 Mark Riccadonna grew up an artsy jock outside of Youngstown, Ohio. At age 17 (like a bad independent movie), Mark moved to NYC in search of himself and happiness. He pursued Theatre at The American Academy of Dramatic Arts, joining “The Company” after graduation. Soon after, Mark stumbled upon Stand-Up Comedy and found success as a storyteller, performing throughout New York City, and ‘on the road’. Mark also performs for Armed Forces Entertainment and has entertained U.S. and U.N. Troops worldwide, performing in six continents and across the United States. Outside of comedy, Mark is an accomplished actor and writer. Most recently Mark has a lead role in the feature film “Days of Power” and is a contributing writer for Saturday Night Live’s “Weekend Update”, Columnist and Travel writer for “Todays Man” Magazine, Wrote and Directed “Radio Gods” television Pilot, starred in “Game Night” (Winner of the International Film Festival NYC) been seen on AXS TV’s “Live at Gotham”, FOX’s “Laughs”, heard on Sirius XM and Bob and Tom, and also has a hit Podcast “Drinks Jokes and Storytelling”.

Whether he is working with The Amoralists Theatre Company (In the acclaimed hit “Happy in the Poor House”), Angry Shih Tzu Productions or on tour with Stand-Up, Mark continues to climb the ranks. He is a gifted storyteller, with a charisma that makes you feel like you’ve known him forever, unique delivery, signature voice (that has landed him several commercials) and likability; you will see why he is a favorite at clubs and theatres everywhere. Look for his second album “Domestic Nomad” released by Realize Records.